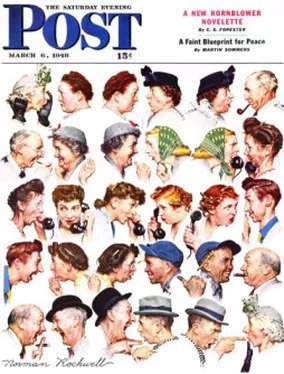 The Gossips by Norman Rockwell appeared on the cover of The Saturday Evening Post on March 6, 1948. It’s a quaint and charming depiction of “secret-sharing” between 15 people. Maybe they’re talking about some floozy who played backseat bingo at the passion pit, or a guy going fishing for a khaki wacky Able Grable. These are not so nice slang terms from the 40’s and 50’s, that might have been repeated through a heated game of telephone.

That was a time when roughly 50% of American households had telephones, and rumors could be controlled. Today approximately 84% of American households have computers according to a 2013 U.S. census. And thanks to research in 2013 from the Pew Research Center we know that at least 78% of teens between 12 and 17 have cell phones, 74% of those teens accessing the internet on those phones. Imagine how quickly and efficiently a rumor about someone can be spread today on social media, where posting on one site in a second can send that same post to a plethora of other sites, reaching hundreds or thousands of people.

In the image above, the last person to get the news can easily locate the instigator and stop the rumor from going further. Today, because of the passive aggressive nature of social media, it’s almost impossible to find the ring leader or stop a runaway rumor once it hits the internet.

When I was 14 my mother called me a slut. I was sitting on the couch with my sweet unassuming boyfriend. Maybe we were holding hands, I don’t remember. I do remember the sting of her words even though I wasn’t sure what slut meant, but I knew it wasn’t good, nor was it something my mother should have been calling me. Here I am, though, on the verge of turning 50, and I clearly remember the sting of those words, from just one person. What parent says that to a child, you ask? It’s probably more common than you think.

I called another girl in my grade in junior high school a slut, behind her back, to a group of friends. I can’t remember why I said such a horrible thing. I most likely wanted to look cool, or was intimidated by how assertive and bold she was, particularly with boys. I do remember that she was bigger, and stronger than me, and that I groveled and apologized when she confronted me face to face. And again I can crisply recall this encounter, and know that gossiping about her, even to just a few friends, was wrong.

Today, cyber bullying, sexual harassment and “slut shaming” are out of control, causing grave emotional and psychological consequences. Many kids who are bullied in this way consider taking their own lives, some go through with it. And it has to stop.

These behaviors are a result of fear and fear driven emotions like anxiety, insecurity and anger. Rather than looking within ourselves, it’s much simpler for some to point the finger at others and label them with a word like “slut” to put the spotlight on someone else.

At the SheBreathes Balance and Wellness Studio we are proud and honored to be hosting a viewing of the documentary, “UnSlut: A Documentary Film”, on Friday October 21 from 7 to 9, with a Q & A to follow. The film was written and directed by Emily Lindin, founder of the UnSlut Project. As an 11 year old middle school girl rumors were spread about her, she was labeled as promiscuous, and cyber bullied through her middle and high school career. She suffered socially and psychologically, and contemplated suicide. She started this project to speak out against “slut shaming”, social media bullying, and sexual harassment, that can not only be experienced by girls but by everyone.

I sent an email to a local school official to make them aware of the event. The email was returned unsent because of language – it wouldn’t go through because of the word “slut”. I had to remove it if I wanted to send the message. If we can’t write a word in an email, doesn’t that validate why it shouldn’t be in anyone’s vocabulary at all? 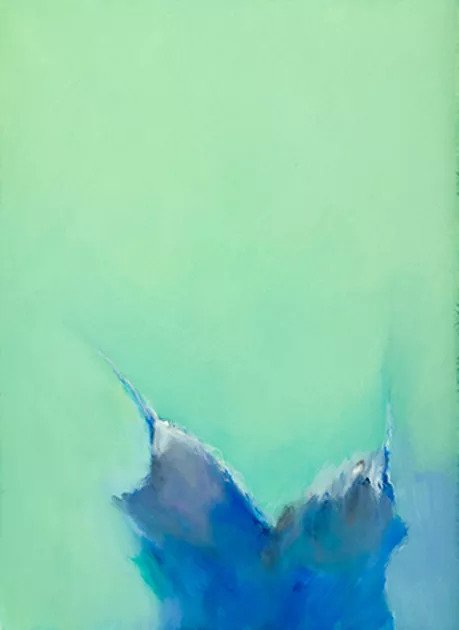 Since October 1st, we’ve had the pleasure of hosting 8 of Martha Wakefield’s acrylics and watercolors from her Slip Series in our SheGallery at the SheBreathes Balance & Wellness Studio. The only reaction you can have when you walk in the room is to look at them immediately. They draw you in, not only with their vibrant colors, or need to focus your attention to grasp what you’re looking at, but with the true concept that something is being lost, drifting its way off the surface. In her artist’s statement, Martha explains that this body of work symbolizes loss of a deep love, once protective and intimate but now a memory of what existed previously. And isn’t it true, how something or someone can become such a natural part of our lies that we move through our days routinely, and if we don’t find a balance between comfortability and awareness, they can drift off, pulled back by the wind, or life, or another world.This collection of works will make you stop and take notice of their beauty, the subtle movement, and the possibility of something of value disappearing while you’re distracted by something else.Martha’s art will be adorning our gallery wall until October 31st. Come see it now, because you will want to come back and take it in again and again. Her personal statement is available to read and to further understand her motivation for this series.You can view the art during any of our scheduled events, or come during one of our open SheSpace/Zen Studio hours to sit and reflect on its beauty. All works that hang on the gallery wall are for sale.